by Gary A. Rendsburg
Blanche and Irving Laurie Chair in Jewish History
Department of Jewish Studies

At this point, it is worth recalling that virtually all of the texts in the Robison Collection always have been known to the Jewish tradition (Bible, etc.) – notwithstanding the occasional appearance of an interesting variant reading in our documents. Hence, their heuristic value lies more in revealing how a remote Jewish community transmitted the sacred texts for centuries in manuscript form – long after the vast majority of Jewish communities transitioned to the printed book (with the exception of the liturgical reading of handwritten Torah scrolls in the synagogue).

There is more, though, from the realm of popular knowledge (for lack of a better term). Almost all of these documents contain the jots and tittles of various users throughout the ages, as illustrated here, the start of MS 17 (dated to the 17th century), which contains the haftarot, or prophetic portions, read in the synagogue each Shabbat. 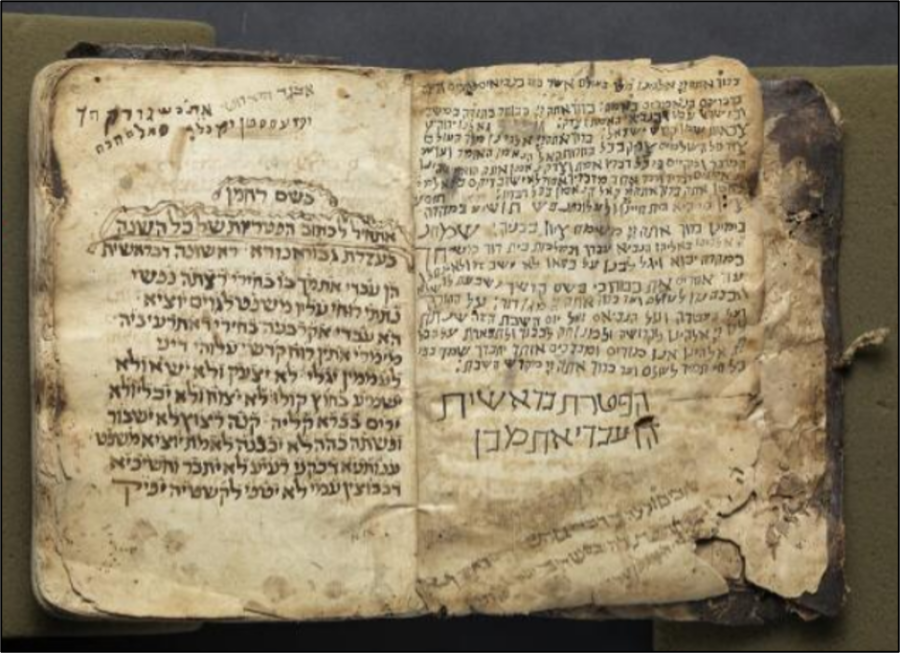 The liturgical text proper starts about one-third of the way down the left page (fol. 1r). Above that, framed in decorative squiggles, the original scribe wrote, “in the name of the Merciful One, I shall begin to write the haftarot for the entire year, with the help of the divine, beginning with Genesis” – a nice touch.

Near the top of the page, however, a later user of the text has doodled the alphabet and some random letters: can you imagine using a sacred text in such fashion?!?! But such was life in Yemen, with writing materials at a premium.

And then on the right side, which is actually the inside front cover, another later individual, with a less-than-professional hand, has written the blessings to be intoned before and after the recitation of the biblical text.

Below that appears in large letters, once again in a less-than-professional hand, the words “haftarah of Genesis” (on the first line) and “behold my servant, whom I uphold” (on the second line), the opening words of Isaiah 42:1 (though with the penultimate letter incorrectly formed and then the penultimate letter not actually part of the biblical text). One gains the impression that a lad, still in the process of learning how to write Hebrew, has inscribed these two lines.

Finally, at the far bottom of the page, is another set of lines, not part of Jewish liturgy, as far as I can determine – though I will leave for those more expert than I to decipher and explicate these words.

If we return to the actual biblical text on fol. 1r, for those who can read Hebrew and Aramaic, I would point out the following, very technical information. First, note that the Hebrew original is accompanied by the Aramaic translation (known as Targum Jonathan, in this case); and secondly, the vowels which accompany the consonants are the supralinear Babylonian ones (a system distinct from the better known Tiberian sublinear vowel markings). Re the first: note that in Yemenite synagogues, the biblical text was chanted both in Hebrew and in Aramaic translation, so that the reciter of the text could simply read straight through, using a manuscript such as ours. Re the second: the pronunciation of Hebrew amongst the Yemenite Jews is closer to the ancient system employed in Babylonia (than in the land of Israel), hence, their continued use of this less well known vocalization system.

So much to learn from our inspection of a single photograph! Once again, multiply this exercise by the hundreds, nay by the thousands, and one gets an idea of the true value of our precious Robison Collection of Hebrew Manuscripts – now available to the world at-large through the Ktiv website!

Acknowledgments: I would like to thank Sonia Yaco and the staff of SCUA for their ongoing assistance with this project, as well as my former research assistant, Annabelle (Nonnie) Sinoff (class of 2021), who provided all manner of both academic and logistical support throughout this process.

Two-plus years after we began the digital imaging process, we now are able to see the fruits of our labor. A search for ‘Rutgers’ at the Ktiv website yields the requisite number of hits: 63 in total (because some of the documents contain multiple compositions, and thus they have been sub-divided by the Ktiv cataloguers, in order to maximize search capacity). See here for the screen shot indicating the 63 hits, with details about the first two manuscripts (MS 4 and MS 17). 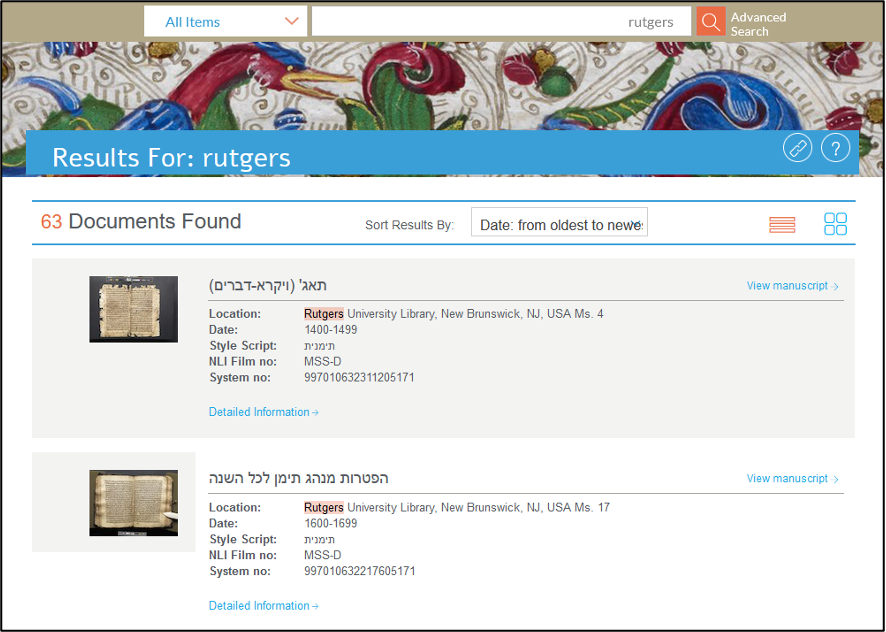 To illustrate how the Ktiv website works in greater detail, I have elected to use Robison MS 9, with the main catalogue entry seen here:

The Hebrew heading informs the user that this document contains the book of Leviticus – though there is more.

If one clicks on ‘Detailed Information’, one is directed to this screen: 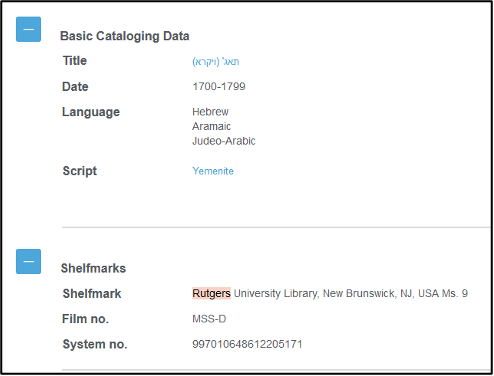 If one returns to the main catalogue entry and clicks on the ‘View Manuscript’ link (see two images above), one reaches the digital images themselves, with page after page available for viewing, as exemplified here: 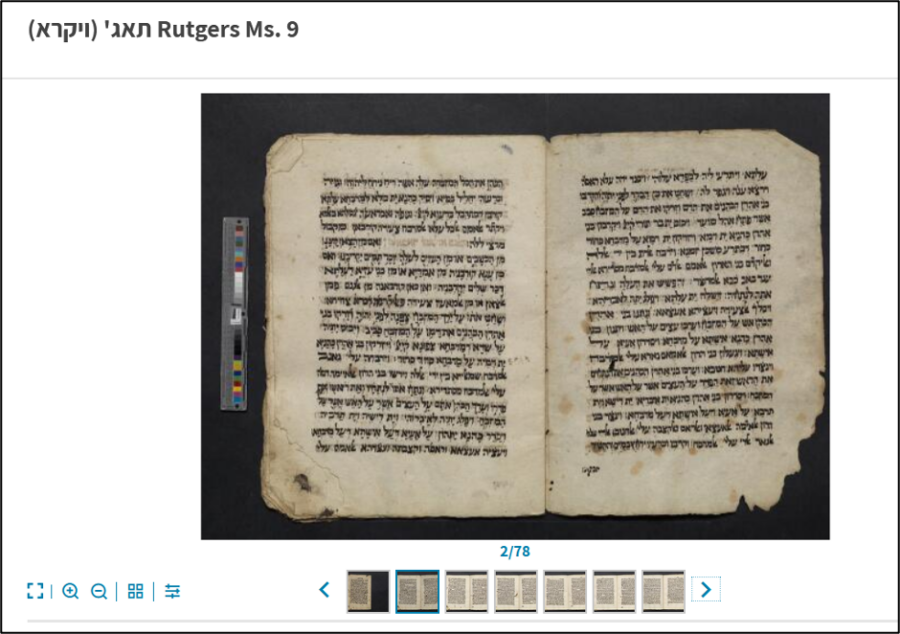 The various options in the bottom left include the zoom feature, which – given the high-resolution images – allows the user to see as much detail as one would like. For example, see here for the screen capture of the four lines in the upper right (= the beginning of folio 1v):

Though in fact one can zoom even further – see here, for example, for the last four words on the first line (recalling that Hebrew, Aramaic, and Arabic are read from right to left):

Multiply this exercise by the hundreds, nay, by the thousands, and one can gain a sense of how our Hebrew manuscripts housed here in New Brunswick are now available to students, scholars, and researchers around the world.

Sometime in the late 1950s or early 1960s, the Adolf and Ann Robison Collection of Hebrew Manuscripts entered the Rutgers University library holdings. Naturally, they were deposited in Special Collections and University Archives (SCUA) in the then relatively recently opened Alexander Library. The c. 50 manuscripts were studied soon thereafter by Professor Leon Feldman (Hebraic Studies), in conjunction with Morris Lutzki, expert in Hebrew manuscripts at the Library of the Jewish Theological Seminary of America. The result of their collaboration was a 53-page typewritten catalogue, stored at SCUA along with the manuscripts themselves.

The manuscripts date to the 15th through 19th centuries and were all written in Yemen. Already in the late 15th century, within decades of the invention of movable type by Johannes Gutenberg, printers (especially in northern Italy) developed Hebrew font for the printing of Hebrew books. Throughout the 16th and 17th centuries, the printing of Hebrew books burgeoned, as the technology spread to main centers such as Salonika, Istanbul, Amsterdam, and Prague. With the new technology readily available throughout Europe and the Mediterranean basin, manuscripts became rarer and rarer (not only in the Jewish world, of course, but throughout book culture more generally).

The one main exception among Jewish communities was Yemen: due to both the relative poverty of the community and the geographical remoteness of the country, the printing press did not arrive until the 20th century. Hence, Yemenite Jewish scribes continued to copy by hand classical Jewish texts such as the Bible, the prayer book, and the Passover Haggadah. Our Robison Collection of Hebrew Manuscripts may constitute the best testimony to this practice in any library outside of Israel.

Enter the digital age, with more and more libraries digitizing their manuscript collections, with high-resolution images readily available for public inspection on the internet. Riding this wave, in 2014 the National Library of Israel (NLI) created “Ktiv: The International Collection of Digitized Hebrew Manuscripts,” in an effort to aggregate all Hebrew manuscripts at a single website. Eight years on, the project now has c. 600 partners (including Rutgers University), with c. 95,000 documents available in digital images.

Our involvement began in 2019, when Rutgers and the NLI signed an agreement, with the latter providing the funds for the digitalization of our Robison Collection. We moved quickly, hired Bruce White, photographer extraordinaire, arranged for library space to undertake the project, and completed the photographic record in January‒February 2020. The main result was c. 5000 images, using the best equipment possible – though note also the timing: we completed the project just weeks before the COVID-19 pandemic would cause the Rutgers campus to close in March 2020, with no further access to Alexander Library.

The pandemic caused some delay, but nonetheless work proceeded. Mr. White mailed an external hard drive containing all the images, all properly organized and labelled, to our colleagues in Jerusalem, and little by little they began to integrate the images into their database.