As we return from the holiday break, we continue our collections move and prepare for the semester ahead.

We’d like to take a moment to remind readers of digital resources we have available while our services remain limited during our move.

Our Digital Resources Guide brings together all currently available Special Collections and University Archives (SC/UA) digitized materials, as well as digital resources outside of Rutgers that are related to our work and that we frequently use. Two new additions to the Guide are:

SC/UA’s Primary Source Highlights is a growing collection of high-resolution images and selected PDF’s that represent our rich holdings across our collecting areas.

We are always working to digitize more materials, so check the Digital Resources Guide and Primary Source Highlights periodically for new additions.

The commercial mover has now moved 973 linear shelf feet of SC/UA manuscripts and rare books from the Alexander subbasement to off-site storage. They have also moved 70 filing cabinets that include printed material, photographs, and maps into the New Jersey Reading Room that will be available onsite when SC/UA reopens. Packing and moving will continue through December 22 and begin again in January.

You can catch up on all of our move updates under “SC/UA Migration Project: Seeking Higher Ground.”

We wish you happy holidays and look forward to a return to reference services in 2022!

The ​phased reopening of SC/UA will begin January 10, 2022, with remote reference service being provided through ​the Libraries’ Ask a Librarian Service. ​Please be aware that the availability of research material will be limited and ​our response time will be longer than usual ​due to many collections being located off-site. When the SC/UA move is complete, ​which by the mover’s estimation will be in March ​2022, research visits for Rutgers patrons will resume by appointment-only. The Clifford Case room in Alexander Library will be used as a temporary reading room for patron visits.

Originally posted on the Books We Read blog.

Books have been banned, challenged, censored, or even burned by organizations, schools, and parent organizations for a number of reasons.  What defines a banned or a challenged book?  A banned book is one that has been removed from the shelves completely.  Books that have been challenged are an attempt by a person or group to remove or restrict materials to protect others.  Books have been challenged for being considered “sexually explicit,” for having “offensive language,” or for being “unsuited to any age group.”  At Rutgers Special Collections and University Archives, we have a collection of over 53,000 books, pamphlets, and broadside.  With that many books in our collections, we have a number of books that have been banned over the years.  Here are a few books from our collections and why they were banned. The Adventures of Huckleberry Finn by Mark Twain

The Adventures of Huckleberry Finn has been a controversial book since its first printing in 1884.  The Concord Public Library banned the book in 1885 for its “coarse language” and today it continues to be challenged/banned for its use of racial stereotypes and slurs. The book was completed in 1943 but could not find a publisher because of its criticism of the USSR, an important ally during WWII.  It was finally published, but was banned in the USSR and other communist countries.  The book is still banned today in North Korea, and censored in Vietnam. Areopagitica; A speech of Mr. John Milton for the Liberty of Unlicenc’d Printing, to the Parlament of England by John Milton

John Milton wrote Areopagitica in 1644 to argued for the freedom of speech and expression and opposing the licensing and censorship by the English Parlament. According to The Guardian, Brave New World is among the top ten books Americans want banned for its contempt for religion, marriage and family, as well as its references to sex and drugs. Candide was another book which was banned upon its release in 1759 by the Great Council of Geneva and the administrators of Paris.  It was later banned in the United States in 1930 for obscenity. The Communist Manifesto by Karl Marx and Friedrich Engels

The Communist Manifesto was banned by many countries around the world to prevent the spread of communism. The poem was part of a 1957 obscenity trial for the topics of illegal drugs and sexual practices.  A California State Superior Court ruled that the poem was of “social importance,” and dismissed the case. Leaves of Grass by Walt Whitman

This poetry collection was considered obscene upon its release in 1855. Libraries refused to buy the book, and the poem was legally banned in Boston in the 1880s and informally banned elsewhere. The Jungle by Upton Sinclair

The Jungle was banned in a number of counties around the world including Yugoslavia, South Korea and East Germany.  The Nazi party in Germany actually burning the book in 1933 because of the socialist views. Of Mice and Men by John Steinbeck

Of Mice and Men is often found on the American Library Association’s list of banned books for its use of racial slurs, profanity, vulgarity, and offensive language. Scary Stories to Tell in the Dark by Alvin Schwartz

This series of children’s books based on folklore and urban legend is on the American Library Association’s list of most challenged series of books from 1990–1999 and is listed as the seventh most challenged from 2000–2009 for violence. Tiger Eyes and Are You There God? It’s Me, Margaret both by Judy Blume Ulysses was banned in the U.S. until 1934 because of obscenity.  That would be this 1924 fifth printing of the first edition of Ulysses owned by Selman Waksman. Uncle Tom’s Cabin was banned in the American south preceding the Civil War for holding pro-abolitionist views and arousing debates on slavery.

Special Collections and University Archives (SC/UA) closed the New Jersey Reading Room on October 1 to allow staff to work on flood recovery activities. The closure will remain in effect for the rest of the academic year.

Hurricane Ida severely impacted SC/UA, so we are taking these measures to ensure the long-term preservation of collections and improve the storage and research environment. No collections were destroyed but there was extensive flooding and damage to the storage areas necessitating moving 27,000 linear feet of collections to safety.

Remote reference, scanning, and instruction will temporarily close on October 15 as we prepare collections to move off-site. We anticipate that a large portion of our collections will be inaccessible for at least a year.

Our two top priorities are preserving our collections and providing access to them. As we secure the material, we are working to find ways to provide access to limited parts of our collections to enable research and instruction to continue. We’ll provide updates on access during renovation on our website and here on “What Exit?”

We apologize for this inconvenience and appreciate your patience and understanding.

By Fernanda Perrone, Curator of the William Elliot Griffis Collection 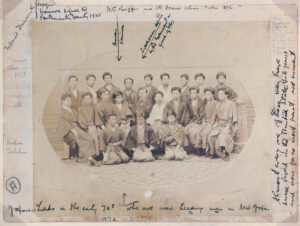 The William Elliot Griffis Collection documents the life, career, and connections of the man who has been described as “the most important interpreter of Japan to the West before World War I.” William Elliot Griffis was born in Philadelphia, Pennsylvania in 1843 and attended Rutgers College from 1865 to 1869. At Rutgers, Griffis befriended some of the earliest Japanese students to attend an American college, and developed a lifelong fascination with that country, which had recently opened to Westerners. After graduation, through his Rutgers connections, Griffis was offered the opportunity to teach natural sciences in Japan. Leaving in fall 1870, Griffis spent eleven months teaching in Fukui in western Japan before moving on to a position in Tokyo. He was joined by his sister Margaret, who kept house for him, tutored students, and eventually gained an appointment at the first government school for girls. Although Griffis and Margaret left Japan in 1874, he would spend the next fifty years writing, lecturing, and collecting material about Japan, producing more than 20 books, hundreds of magazine articles, newspaper editorials, and reference book contributions.

As well as keeping diaries and letters from his time in Japan, throughout his life Griffis collected publications, manuscripts, photographs, and ephemera related to Japan and East Asia. Indeed, Griffis’ most enduring legacy is his archival collection of over 250 boxes, which was donated to Rutgers after his death on February 5, 1928. Reputedly his wife Sara Griffis filled half a box car of a train with Griffis’ collection for the slow journey from his home in upstate New York to New Brunswick. Arrangement and description of the Griffis Collection began as early as the 1930s with a grant from the American Council for Learned Societies. After a hiatus during the Second World War, cataloging resumed with the collection’s rediscovery in the 1960s and continued under a succession of curators into the 2000s. A finding aid in paper format was created in 2008, which numbered 288 pages. In the following years, a 69-page inventory of photographs, a 37-page list of oversize materials, and several other sections were completed.

While SC/UA faculty and staff have labored to mark up finding aids using Encoded Archival Description and make them discoverable on the Web, no one had the time or fortitude to attempt the Griffis finding aid. Only during the pandemic, with the uninterrupted time allowed by remote work did Processing Archivist Tara Maharjan take on the challenge of encoding this behemoth. Working closely with Griffis Curator Fernanda Perrone, Tara began work in October 2020 and finished in March 2021. Today the finding aid can be found on the SC/UA website at http://www2.scc.rutgers.edu/ead/manuscripts/griffisf.html, where it is keyword searchable and discoverable by Google. Parts of the collection have also been microfilmed and digitized by Adam Matthew Digital and can be viewed through the Area Studies Japan database. Photographs of early Japanese students at Rutgers can be viewed in RUCore: for example, this portrait. The rare and unique Korean photographs from the collection have been digitized and will ultimately become available for research. Some can be viewed at SC/UA Primary Source Highlights.

Congratulations and sincere thanks are owed to Tara Maharjan for this amazing accomplishment, which will bring the collection to a wide audience of students, scholars, and interested individuals, stretching from New Brunswick to Japan and beyond.

This is the third and last post in a short series featuring final projects from the Rutgers Byrne First-Year Seminar I taught in Fall 2020, “Examining Archives Through the Lens of Popular Culture.” You can read about the course and the final project, in which students envisioned their own pop culture archives, and check out other student projects, here.

This project, An Old Way to Listen to Music: Archiving a CD Collection, by Carmen Ore, Rutgers Class of 2024, wraps up the series with a consideration of how one’s connection to a particular type of music can extend to the media form.

This is the second in a short series featuring final projects from the Rutgers Byrne First-Year Seminar I taught in Fall 2020, “Examining Archives Through the Lens of Popular Culture.” You can read about the course and the final project, in which students envisioned their own pop culture archives, in this post.

This project, entitled Archiving Goodness, is by Sarah LaValle, Rutgers Class of 2024. Sarah’s archive, like our previously featured student’s archive, Domination of Face Masks in 2020, is another timely project that came out of this course.